This entry was posted in Substance Abuse and tagged Alcohol Abuse and Addiction, Misuse, Preventing Misuse, Trust on June 28, 2016 by Team Addiction Hope. 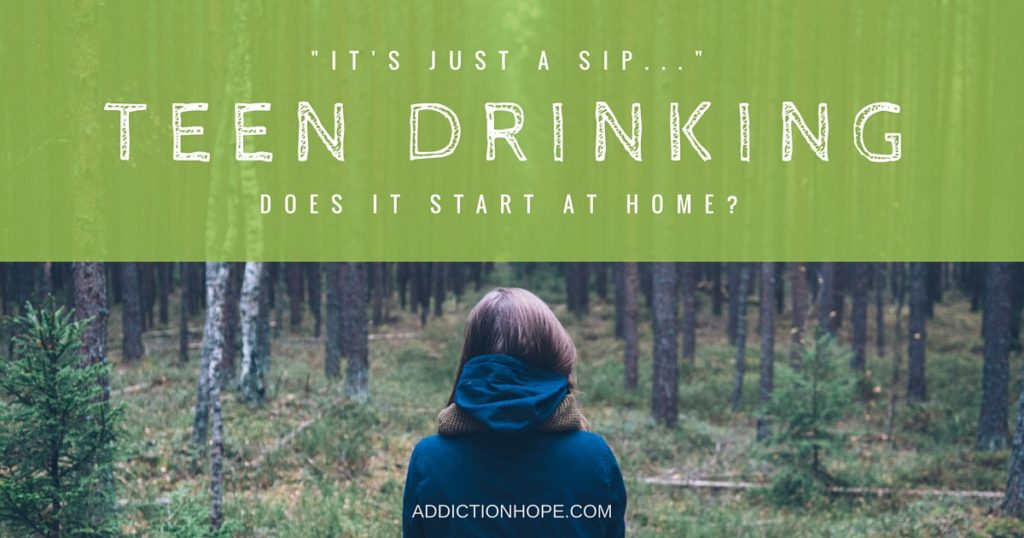 You’re having a family party, and the wine is flowing. Your son is eager to be considered one of the “adults” and asks for his own glass.

If this scenario sounds familiar, you’re not alone. Americans often hear that our drinking rules are vastly different than the rest of the world. Our drinking age is 21 instead of 18, and many European children often sip small glasses of wine with family meals.

“One drink won’t hurt” is, after all, “just a sip.” But research shows this attitude can be harmful.

Teens Begin Their Relationship With Alcohol With Their First Drink

Pre-teens and teenagers begin their relationship with alcohol from their very first encounter. Many parents believe that exposing their children to small amounts of alcohol before the age of 21 while in the safety in their own homes is safer than waiting until college parties. But the truth isn’t always so simple.

“The law is clear. The age for purchase and public consumption is 21, and we do want to teach respect for the law even if we don’t totally agree with it,” said Dr. Richard Horowitz, parenting coach and author of Family Centered Parenting: Your Guide for Growing Great Families.

The Dangers Of Teen Alcoholism

Letting your pre-teens (and their friends) drink under your roof can lead to harmful consequences, not to mention civil and criminal liabilities. Also, scientific literature suggests that the gesture, even though intended to demystify the “forbidden fruit,” may actually backfire.

Teens and pre-teens who drink are also more likely to become sexually active at earlier ages, and such sex is often unprotected. Even though letting your children have their first sip at home may seem benign, teens and pre-teens need to know that alcohol is a harmful drug.

At times, it may seem like your pre-teen or teenager has no interest in what you have to say. But you’re still the role model, and they do look up to you.

Set a good example by forbidding underage drinking. It’s in their best interest. Many teens and pre-teens don’t have the capacity to understand responsible drinking. Their impulse control is lacking, and the prefrontal cortexes of their brains are still developing.

While you should condemn underage drinking in your home, an open dialogue about the dangers of alcohol is also absolutely essential. Your teen should be able to talk candidly with you about the pressure to drink that he or she faces.

When Is The Right Time To Discuss Alcohol Use?

If it seems too early to talk to your child about drinking, it’s not. Almost two-thirds of 8th graders report that alcohol is “easy to get.” One-third reported drinking in the past year.

The time to talk to your child about drinking is now. Model good behavior and remain open to discussion to foster a healthy future relationship with the liquid substance.

Have you or would you let your teenage child take their first sip of alcohol under your roof? Do you think doing so leads to alcohol abuse down the road? Please share your thoughts in the comment section below.