This entry was posted in Substance Abuse on January 16, 2014 by Platinum. 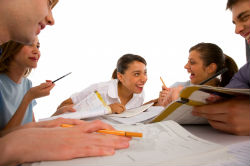 The transition to college continues to be a vulnerable time for students, who are often undergoing several development changes.  This time period can be particularly challenging as students are also faced with relocation, separation from close family and friends, financial stress, academic demands, and new peer pressures.  These external stressors, in combination with many newfound freedoms, can leave college-age students with an inability or insufficiency in coping.  Many students may turn to alcohol, in the form of social drinking, which may escalate to binge drinking or alcohol abuse.

A recent study published in the Journal of Abnormal Psychology suggested that specific risks factors can increase the risk of unhealthy drinking habits among college students.  Researchers from the University of Buffalo examined almost 500 students as they entered their first year of college and at eleven different points throughout a three year period.  Researchers specifically sought to focus on the correlation between alcohol consumption and PTSD (post-traumatic stress disorder).  Results demonstrated that overall, the two factors were usually connected; as alcohol consumption increased, so did PTSD symptoms [1].  In addition, researchers found that the estimated 9 percent of college students who have symptoms of PTSD have a greater likelihood of drinking more alcohol than students without this psychological condition.  Researchers determined that heavy alcohol consumption can actually worsen PTSD symptoms over time, thus propelling a ferocious cycle.

Lead investigator of this study and associate professor of psychological at the University of Buffalo, Dr. Jennifer Read, noted: “We show that alcohol use and associated problems are linked over time to an exacerbation in PTSD symptoms, and that PTSD symptoms show a similar effect on alcohol consumption. Each affects the other. As such, both PTSD and heavy drinking are risk factors for one another, each with implications for the other over the course of college.”

These findings are significant for families in preparing their children for the transition to college as well as for college counselors who may be involved with students suffering with PTSD or drinking issues.  Understanding the association between PTSD and alcohol consumption gives deeper insight into the environmental and psychological components of alcohol use.  Being better prepared for the obstacles that one might face as they transition to college can be helpful motivation for establishing healthier coping mechanisms.

As stressful and difficult as the college transition might be, these precious years also offer rich fulfillment and hopeful promises for the future.  If you or a loved one is struggling with alcohol abuse, take the first step towards recovery by asking for the help you need.

*Image Courtesy of Ambro at FreeDigitalPhotos.Net