This entry was posted in Substance Abuse and tagged Adolescents, Preventing Misuse, Stimulant, Trust on August 19, 2016 by Team Addiction Hope. 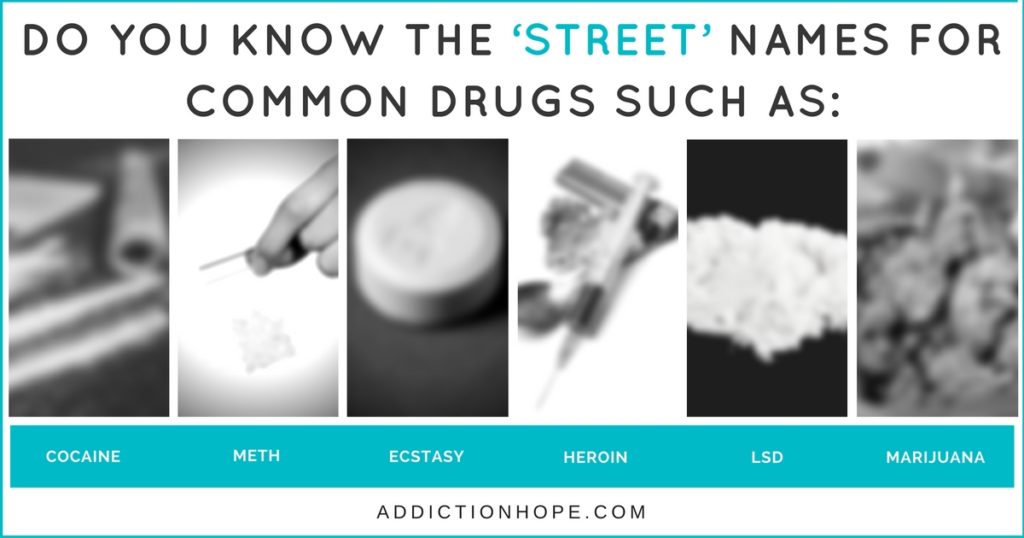 There is a wide world of street names for drugs, and they’re constantly changing. For parents especially, it’s important to recognize the alternative terms that people use to refer to common drugs. Even if you don’t have kids, you should be aware of the dangers that are present with illegal drugs and what they’re sold as.

How These Different Drug Names Came To Be

Some of the street names may sound silly, but don’t let the verbiage undermine the danger of these drugs. Such names are used in code among dealers for secrecy. The name must explain what the drug is, but make it sound normal enough to mislead authorities.

Street names are designed to confuse the police and enable users and dealers to have conversations in public without seeming suspicious. Consider the difference between these two questions: “Did you smoke marijuana last night?” and, “Did Mary Jane visit last night?” Though Mary Jane as pot has become a commonly used term, you can see how one question is blatant and the other could easily be dismissed, even by an eavesdropper.

Some of the alternative words used to describe drugs have become completely mainstream. Everyone knows that “pot” and “weed” refer to marijuana. There are many terms that most people have heard at least once. They include:

A big reason many of these terms have become commonplace is through media and entertainment. Movies and music both expose people to the street names of drugs. Although this can help you learn a few labels, it also pushes those in the drug industry to keep shifting the names.

There are many other names for these drugs. Here are a few examples of common drugs and some of their street names:

This white powder is one of the most notorious illicit drugs. It causes bursts of energy and euphoria, which are very hard on the heart and brain. It is also known as:

Crystal meth is almost three times stronger than cocaine. It provides a much longer high as well as extreme crashes that make the user want to partake again. These terms all refer to meth:

This drug, also known as MDMA (3,4-methylenedioxy-methamphetamine), is most often associated with clubs and raves, especially because the dopamine it help release in the brain can simulate a feeling of connection between users. It is especially risky because the pills are generally less than 30 percent pure and can contain other serious drugs.

MDMA goes by several other terms, including two that are only one letter long. These alternative names include:

The most addictive drug on the list, heroin is a very dangerous substance. It is less widely used than some of the other substance, likely because it is typically taken by injection. These terms all allude to heroin:

LSD is one of the most famous drugs of the Woodstock era, becoming mainstream in the 1960s. Trips can last for several hours and include very powerful hallucinations. Slang terms, besides acid, include:

The leaves of the cannabis plant are by far the most popular illicit drug among teens and younger people. The THC in the plant causes sensations of relaxation and sometimes mild hallucinations. Aside from weed and pot, the substance is also called:

Eating a psychedelic mushroom produces effects similar to LSD. Users can experience a strained sense of reality thanks to confusion with time and hallucinations. Mushrooms also go by the names:

Why The Names Change

There are several reasons why these chosen slang terms change over time. The primary reason is too much police attention. Once the names are no longer secret, it becomes increasingly risky to use them, whether it be in verbal conversation or through digital contact.

Over-usage is another compelling factor for change. Switching the label for a drug can open new possibilities. Dealers may want to create excitement with their customers or even give the impression than an existing drug is something new entirely. Think of the rise of the term “Molly” for ecstasy. Dealers who give their product a unique name can also help distinguish it from the competition.

Sometimes, street names become fully accepted. With lots of media and entertainment coverage, a term can stick with the public. Once it is “exposed,” the common term can be used to try to get everyone on the same page. “Weed” is a prime example, since it is one of the most enduring alternative names.

You Can Get Help For Drug Use

Many people begin experimenting with drug as teens, just out of curiosity. Unfortunately, this can lead to addiction and a complete lifestyle change. Drug abuse, however, can be treated. With treatment centers and programs available across the nation, it’s easier than ever to get help for yourself or a loved one, although keep in mind recovery is difficult and never guaranteed.

Are there new street names for drugs floating around that you are aware of? Please share them below. Knowledge is power when helping those struggling with addiction.