advertisement
This entry was posted in Substance Abuse on April 25, 2014 by Platinum. 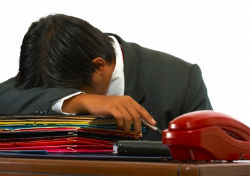 Non-medical use of prescription drugs has become more widespread in the workplace, whether it is in attempt to increase focus and productivity or to manage high levels of stress. The Coalition against Drug Abuse has identified that almost 75% of drug users are employed and actively working, which translates to more than 12 million people who are operating under the influence of drugs in the workforce [2]. Some of the occupations with the highest prevalence of drug abuse include jobs in construction, entertainment and media, sales, food service, and installation/repairs, according to a study by the Substance Abuse and Mental Health Administration (SAMHA) [3]. Whether the drug of choice functions as a stimulant, painkiller, or tranquilizer, attempting to work while under the influence of prescription medications is a dangerous feat.

The abuse of prescription medications while working poses many possible hazards, including risk of accidents, decreased productivity, poor functioning, and increased inaccuracy. Regardless of what the occupation is, many jobs require a high level of alertness and precision to produce maximum efficiency. When drug abuse becomes involved, skills that are highly needed can become compromised and hinder one’s ability to function at their job. The issue of prescription drug misuse is also concerning for employers, whose businesses run on the efficiency of their employees.

The abuse of prescription medication while working can cost a business, both directly and indirectly. Major costs can include productivity losses, higher turnover, direct health care, training of new employees, and more. There are many aspects of a job that can contribute to drug abuse, such as high stress and long hours, though workplaces can help play a part in substance abuse issues among employees. For example, establishing an employee-assistance program that can offer counseling services for drug abuse can help play a part in early detection and intervention. Clearly communicating guidelines in regards to illegal drug use, as well as policies and procedures, can help establish expectations prior to employment.

While many jobs and occupations are stressful and demanding by nature, the abuse of prescription medications can only cause further harm and destruction. If you are under the influence of prescription drugs while working, considering reaching out to a trusted friend or family member for help or support. Alternately, you can see if any services are provided through your employer or HR to help address any addiction issues you are having.