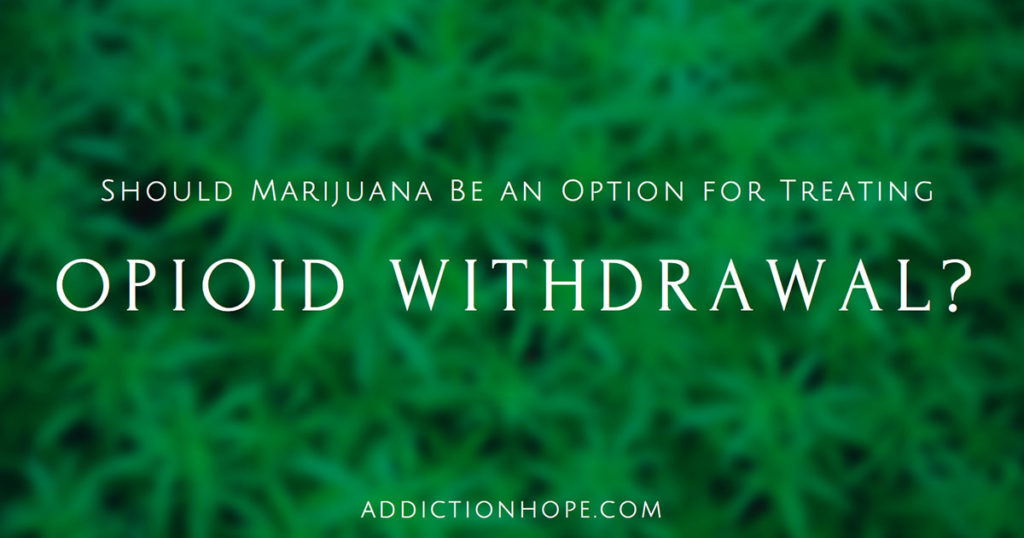 The death toll from opioid overdose continues to rise with surprising speed, touching every state in the U.S. and doubling the number of annual heroin overdose deaths in just two years. Narcotic painkillers are incredibly addictive, and doctors are prescribing them at increased rates – a combination that’s killing thousands of people.

Getting people off opioids is a multifaceted process. Treatment centers must manage withdrawal symptoms, heal the brain and body, and flush out drug cravings. Typical detox treatments for opioid addicts involve methadone-based medications. However, recent research has led many to believe that medical marijuana may be the answer to opioid withdrawal and addiction.

When doctors replace one synthetic opioid, such as prescription painkillers or muscle relaxers, with another, there’s no room for the brain to recover. Methadone-based treatments block chemical signals from reaching the brain, but their major effects end there. Their ability to promote healing, help with withdrawal symptoms, and provide therapeutic benefits are limited and not as effective as cannabis’ ability is.

Buprenorphine and naloxone are used together to reduce drug cravings during opioid withdrawal and addiction treatments. Clonidine is a blood pressure medication that can reduce the patients’ “fight or flight” response to being weaned off opiates or heroin. While these treatment methods, as well as those involving methadone, have helped many opioid addicts get clean, they may not be the best solution.

Is Marijuana The Solution?

A study by Thomas Jefferson University shed light on the positive effects of medical marijuana for patients seeking treatment for opioid addiction. Patients who were given cannabis as a treatment rather than a variety of other drugs suffered the least amount of withdrawal symptoms. This led researchers to conclude that there’s substantial evidence that cannabinoids can be useful as medication.

Medical marijuana is now legal in many states. In fact, fewer states prohibit cannabis for medical and non-medical use than those that have legalized the substance. From a legal standpoint, medical marijuana is a better alternative to illegal opioids (such as heroin) because it reduces the risk of people going to jail and losing custody of children as a result of possession and use of illicit drugs.

Opioids are some of the most addictive drugs known to man. The rate of opioid use and addiction has become a growing problem, leading to thousands of opioid overdose deaths. Marijuana is physically non-addictive and you can’t overdose, solving two of the major problems of opioids.

Marijuana could be suitable as an addiction treatment because it eases opioid withdrawal symptoms during detoxification. Detox is a difficult process – one that many addicts can’t withstand during recovery. Medical marijuana reduces the effects of chronic pain, nausea and vomiting. These are the three dominate withdrawal symptoms that addicts endure when coming off heroin and opioids.

An Alternative To Methadone-Based Treatments

A common treatment for heroin and opiate addicts is a methadone-based medication, which can produce similar “highs” to what addicts experience with opioids. The chemical compound in marijuana, tetrahydrocannabinol (THC), is the only one that causes a high. However, many cannabis growers can produce medical marijuana without THC, making it an even safer alternative to methadone-based treatments.

Medical marijuana promotes the body’s natural system for healing itself. Through increased immunity and decreased pain and inflammation, the body is capable of healing the brain after opioid use. An addict’s opioid cravings are thus diminished or removed without producing side effects. Methadone treatments, on the other hand, only block chemical transmissions from reaching the brain.

The positive qualities of marijuana help the body and mind – especially those of opioid addicts. The common benefits of cannabis include:

These qualities help significantly reduce withdrawal symptoms and make the process much easier on addicts’ minds and bodies.

Drawbacks Of Using Marijuana As A Detox Treatment

Despite the positive effects of using medical marijuana to treat opioid dependency, giving it to addicts isn’t as simple as it may seem. Many doctors agree that marijuana can be a gateway drug, and that it isn’t viable as an exit drug without extensive patient follow-up. The fear is that opioid addicts will begin using both drugs instead of fully switching to medical marijuana.

Using medical marijuana in treatment centers is still a new concept that’s being researched extensively. Until more knowledge about the substitute is available, opioid addicts need to keep their treatment options open.

If opioid addicts can switch to medical marijuana during (and after) the treatment process, it could dramatically reduce the rate of overdose deaths. Medical marijuana is practically non-addictive and completely safe for users, making it a solution with a minimal amount of health risks. If treatment centers can successfully treat opioid withdrawal with marijuana, users will potentially continue using cannabis, instead of opioids, for good. Better yet, hopefully users will learn to wean themselves off both drugs.

Do you agree with using medical marijuana to treat opioid withdrawal and addiction? Please opine in the comment section below.