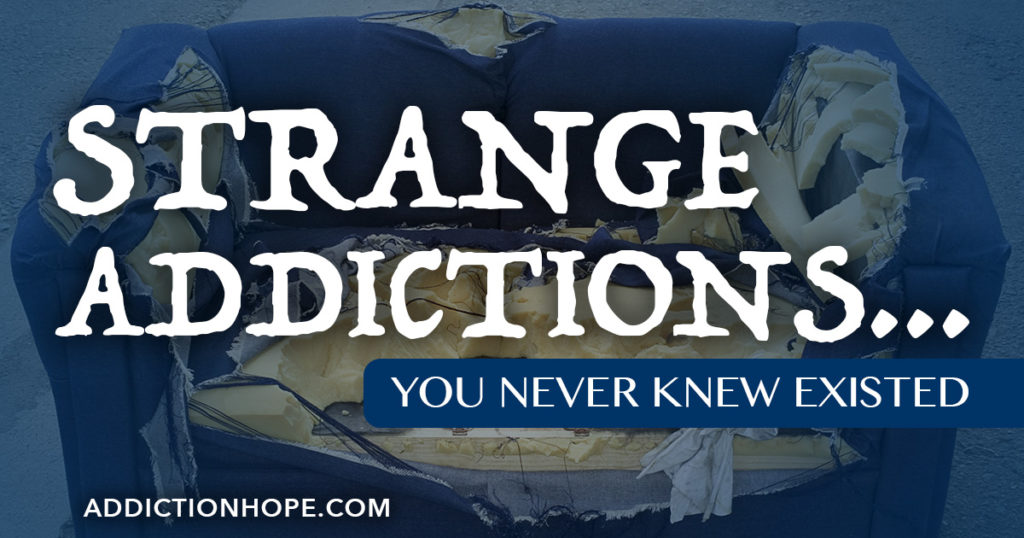 The word “addiction” connotes a harmful dependence on alcohol, nicotine, pills, cocaine or injectable substances such as heroin. Current obesity statistics show that addiction also can refer to food. Yet, addiction does not discriminate.

People can and do become addicted to almost anything. Some addictions are downright strange – so strange that television series have been created around them.

What Makes An Addiction Strange?

Most people don’t call these addictions strange because they are well known. Food, alcohol, pills and tobacco are common sources of addiction, and various forms of treatment are available for them.

What qualifies one’s addiction as strange is when it is out of the ordinary. Someone’s addiction might be strange because there isn’t a classical treatment plan for it. For example, there are no detox or rehab facilities dedicated to helping people addicted to eating nonfood substances. There isn’t necessarily a sexual addiction treatment program for a person who has intimate encounters with a car.

The emotional and psychological fallout associated with one’s addiction might make it “strange.” Most, if not all, addicts are afraid or ashamed to admit their addictions and get help. Arguably, there is more shame, fear and guilt attached to an uncommon type of addiction.

Thanks to the TLC and Discovery Life show “My Strange Addiction,” uncommon addictions have garnered more attention in the past decade or so. They vary greatly in type and severity. Men and women of all demographics experience them.

Many strange addictions had been hidden for decades, some for entire lives, including:

In some, though not all, cases, these people could have pica, a medical condition that involves cravings for nonnutritive substances. For example, some women on My Strange Addiction report their odd cravings began during pregnancy, when some experience pica for the first time. The difference between addicted and non-addicted persons is whether pica symptoms disappeared or remained postpartum.

One man reported sexual addiction to his car, which he named “Chase.” Another man had a sexual relationship with a life-size doll, which he referred to as a “synthetic partner.” Still, other strange sexual addictions have involved objects such inflatable pool toys. All have been featured on “My Strange Addiction.”

People with this type of addiction are often diagnosed with “object sexuality,” or a preference for inanimate objects in relationships and intercourse. The emotions and experiences of these addicts are real, and they must be handled with a high level of specific care.

“My Strange Addiction” participant Maureen was so addicted to makeup that she wanted her green eyeliner permanently tattooed on. She often slept in makeup, causing damage to her eyes and skin.

Barbara, Maureen’s counterpart for the half-hour episode they shared, was addicted to all things death-related. She would picnic in cemeteries, read gravestones and keep death-related objects in her house. Some people’s addictions involve inanimate objects or certain concepts in a nonsexual context.

Getting Help For A Strange Addiction

As noted, many people with strange addictions don’t get help because they’re afraid or ashamed, while others are perfectly comfortable in their addictions. If your addiction is damaging relationships with other people, or if it could physically harm you, you should seek help. Like many “My Strange Addiction” participants, you can talk to a doctor, local counselor or a trusted friend. Don’t be too proud to seek proper therapy.