advertisement
This entry was posted in Mental Health and tagged Adolescents, Process Addiction, Signs and Symptoms on September 8, 2016 by Team Addiction Hope. 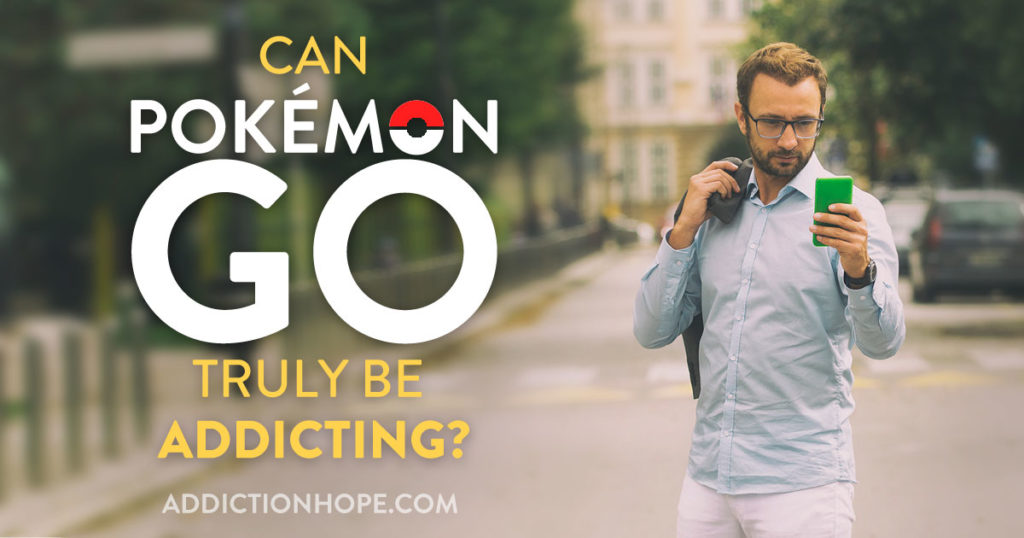 Nearly everyone has heard something about Pokémon Go over the last few months, even if they don’t play it themselves. Since its recent release, this game has become something of a worldwide phenomenon, attracting millions of players in a relatively short amount of time.

Though many have heard of the game, few understand the very real possibility of addiction to it, or even the compulsion that drives such addiction. Engaging in this game can lead to true dependence.

One of the reasons Pokémon Go became popular so quickly is because the Pokémon franchise has spread to many cultures over the last couple of decade. Many millennials, and even Generation Z children, grew up playing and collecting Pokémon. The original game came out in 1998, and since then there have been numerous other video games versions, a trading card game, movies, television series, toys, clothes and more. It’s as big as most superhero franchises.

The basic premise of the entire Pokémon series is that players exist in a world where domesticable creatures (the titular Pokémon) roam the planet. Players take on the role of Pokémon trainers, people who spend their time catching and training these creatures and battling against other trainers and their teams of Pokémon.

Explanation Of The Basics Of Pokémon Go

Pokémon Go is more advanced in many ways than any of the other Pokémon iterations. In fact, Pokémon Go is the first successful augmented reality game. Augmented reality blends the world we all inhabit normally with a digital one, using a device to allow us to see and manipulate digital objects as though they existed here. The game application uses a smartphone camera’s to insert virtual Pokémon into what looks like the physical world.

For Pokémon Go, this means players can find Pokémon randomly wandering around our world. Using a smart device with the Pokémon Go app installed, people can catch Pokémon in their homes, at the grocery store, out on a hike or just about anywhere else. Once a player has caught a creature, they can make the critter stronger by feeding them “candies” and using them to defeat other players’ Pokémon at virtual “gyms.”

Pokémon Go is a unique video game experience: It forces people to travel and interact with the real world. “Pokémon centers” and “gyms” are scattered throughout our cities, often based on memorable real-world locations. Some Pokémon are region-specific, meaning players must travel if they wish to catch every creature available.

The drive to catch every single Pokémon is at the heart of most cases of Pokémon Go addiction. In psychological terms, there are two types of collecting: aesthetic and taxonomic. Aesthetic collectors gather objects based upon how pleasing they find them. Taxonomic collectors want more items that belong to a certain group, regardless of any particular attributes of one object.

Collecting Pokémon falls under taxonomic collecting. Collectors want to catch more of the Pokémon in the game (which currently tops out at 151, but should increase over time). Taxonomic collectors don’t necessarily want one of each Pokémon – they are driven to have bigger and better collections than other people. For these players, it is a way of attaining higher social status.

Collection As A Disorder

The American Society of Addiction Medication explains addiction as a disease of brain reward. Accordingly, most people think of addictions as they pertain to chemicals or activities that affect our brain’s neural wiring.

However, research suggests that people can develop true compulsions for collecting things. Collectors, when they find an exciting piece for their ensemble, are spurred on by a brain-reward trigger. Thus, the pleasure of capturing Pokémon can become addictive in itself.

In most of those rare cases in which a person becomes addicted to collecting some group of physical objects, the nature of those objects prevents them from going too far into the addiction. Generally, space and cost are limiting factors for collectors. Such limitations may thwart the beginnings of addiction.

People who collect creatures in Pokémon Go, though, have no such constraints. They can catch a virtually unlimited number of them, expanding their collection infinitely.

Pokémon Go Addiction Is No Joke

For the most part, Pokémon Go is a fun and healthy game to play. It encourages people to leave their homes and explore the world around them. However, there is also a dark side to it. Pokémon Go addiction is a reality for some individuals, and it can be just as crippling to some as any addiction to drugs, gambling or sex.